The FCA will soon be publishing its final report on insurance pricing in the UK personal lines market. Coverage can be found on our blog with additional insight available to our Market Intelligence subscribers.

The interim report identified 6m customers it believes are paying excessive prices for their insurance. Of these, 2m are “vulnerable”. The final report will put forward remedies.

We are concerned that the FCA’s remedies for current pricing practises are being made in the absence of public consensus about the nature of insurance. Motor insurance is unique in that it is compulsory, is sold by commercial enterprises and is priced based on the nature of the buyer rather than the product.

This throws up three question:

In most countries, motor and home insurance is priced according to an approximation of the risk profile of the insured. The impact is that different customers pay different prices for the same ‘product’.

There are two reasons why premiums could vary. First, there are the assumptions about the future claims experience of the customer, for example their age or the size of the car engine. Second, there is the actual claims experience which generally affects pricing through the application of a no-claims discount.

It feels reasonable that actual claims experience should confer an advantage on the policyholder and is therefore not considered further.

But should different customers pay different prices for the same (sometimes compulsory) product based on their profile? There are clear public policy issues around the high prices charged to young drivers. Should a ninety year old be priced out of buying motor insurance if they have been accident-free for the last seventy years? Is it reasonable for rural teachers, who rely on their car to get to work and may have a higher claims experience, to pay more than a management consultant?

In actual fact, risk rating is not standard in all insurance markets. For example, some (admittedly less “sophisticated”) markets price on standard market tariffs. Life insurance and annuities are generally not individually rated and the UK health ‘insurance’ system is paid for out of taxation.

This is a point which only public policy can solve. If any ‘benevolent’ insurer standardised rates across the portfolio, it would quickly find itself selected against as competition poaches overpriced attractive risks. This is being done in the US, for example, where insurers cherry-pick against the National Flood Insurance Programme, a federal insurance product. Any national programme therefore only works if competition is banned, which does not sit well with capitalism.

What is acceptable price discrimination?

Any system based on risk rating will lead to skews in the market for two reasons: differences between two otherwise similar types of customer and extreme profiles. On the former, public policy has already laid down some parameters in this regard. For example, long-established US “redlining” laws prevent insurers from using certain characteristics such as race in their pricing. In 2012 the EU introduced the Gender Directive which prevented insurers from using gender as a pricing factor.

But what about the examples we cited in the previous section? Should age and profession also be protected characteristics in insurance pricing? Public policy has merely scratched the surface of this debate.

But things are going to get more complicated. The advance of computational techniques will make pricing ever more granular. This will increase the skew in customer segments – for example young drivers with particularly poor characteristics will receive even worse prices. This has the potential to make certain segments uninsurable. 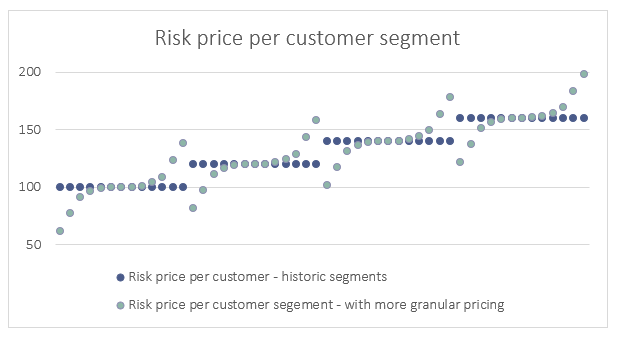 Finding remedies for this situation may not be straightforward and again points to the need for a public policy solution. For example, consider a market where certain insurers specialise in “good” drivers and others on “bad” drivers. One company may have optimised its pricing for drivers with an average premium of under £500, whilst another may be targeting those paying over £1,500. In other word, the market pricing skew may not be resolved through action taken against individual companies.

The third question is then whether variable margins are appropriate. Best practice pricing is that insurers determine the fully loaded cost, and then apply a margin to determine the “street price”. This margin is generally set based on a view of customer lifetime value and elasticity.

This question cannot be seen in isolation from the points above about risk pricing. In short, is risk pricing made acceptable if the insurer reduces its margin on that customer? Is it reasonable to charge one customer a £1,000 risk premium if the margin is reduced to 1% (“we’re hardly making a profit on this customer”), compared to a 10% standard rate? 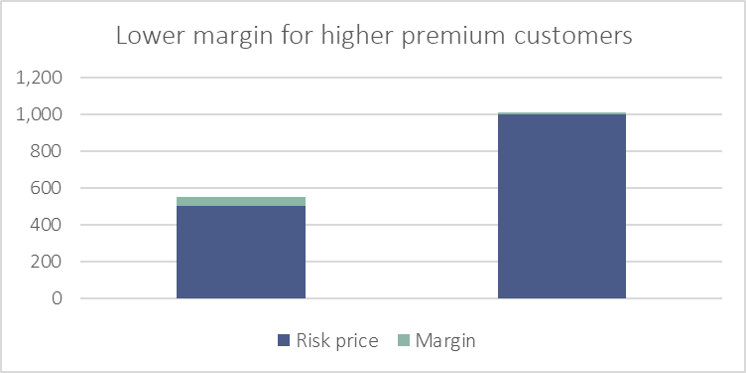 At this point we are back to similar questions as those raised above about the circumstances in which it is reasonable to discriminate in pricing. There is general consensus that “vulnerable customers” should not be exploited in pricing, but there is no clear public policy definition of what vulnerable constitutes. Is an internet-savvy, time-constrained single mother in her 30s “vulnerable” for the purposes of insurance pricing? How do you codify the line between her and someone who does not switch due to laziness?

A further complication here is that many carriers operate on aggregators through brokers and MGAs. Often these intermediaries have authority to set the “street price”.

So what is the answer?

The purpose of this post is not to propose an answer: that is an extremely complicated challenge which has so far occupied the FCA for 18 months and is generally acknowledged to have the potential to unleash any number of unintended consequences. We noted a line in the FCA interim report where it seemed to be backing away from long-term interventionist measures likely for this reason: “We will consider if there is a case to remove them should they successfully tackle harm and the market has developed sufficiently so that they are no longer required.” [1.15]

The answer to “fair” pricing ultimately comes down to two questions: first, does the market overall benefit from cut-throat aggregator-driven competition like in the UK; and (if so) how does the market respond to the inevitable skews (through both risk and street pricing)?

Some argue that the high customer acquisition costs from this model (through both first year discounts and advertising) inflate the cost of policies. Conversely, we have read one compelling academic paper that argues that average pricing is lower in markets with cut-throat competition. We believe that it is likely that the absence of aggregators would lower price transparency which would in turn reduce switching and increase the average price in the market.

There are some questions which economists can answer and the FCA has already published significant research in this area. However, there are other points that need to be solved within a frame of reference of clear public policy. The latter appears to be lacking.

Our Market Intelligence Flavour of the Month highlights notable market trends, keeping you up

ESG and the insurance industry