InsurTech 2017: How insurers and brokers can respond

2016 has seen a surge in both InsurTech funding and column inches. As Ori Hanani, COO of insurer Admiral in France has commented, “[2016] is the year in which InsurTech reached a tipping point into mainstream awareness” and the World Economic Forum recently said “the most imminent effects of disruption will be felt in the banking sector; however, the greatest impact of disruption is likely to be felt in the insurance sector”.

Whether you agree with those quotes or not, InsurTech funding continues to accelerate, as data from CB Insights shows. 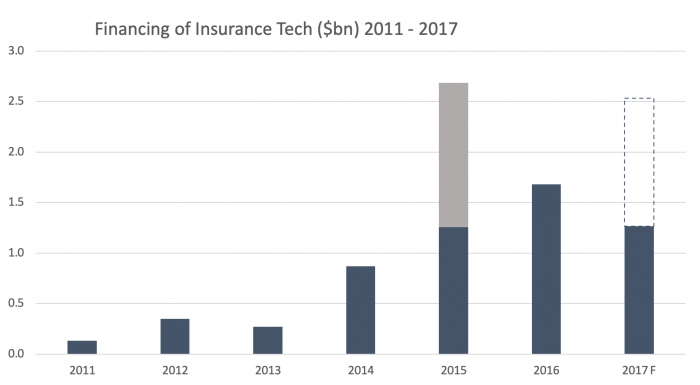 It is also undeniably true that many insurers are increasing their innovation and InsurTech response activities. Some fear being “Ubered”; others just want to invest to ensure they remain relevant in the marketplace.

In this blog describe nine responses available to incumbent insurers and brokers, whatever their innovation objectives. You can see our infographic here: 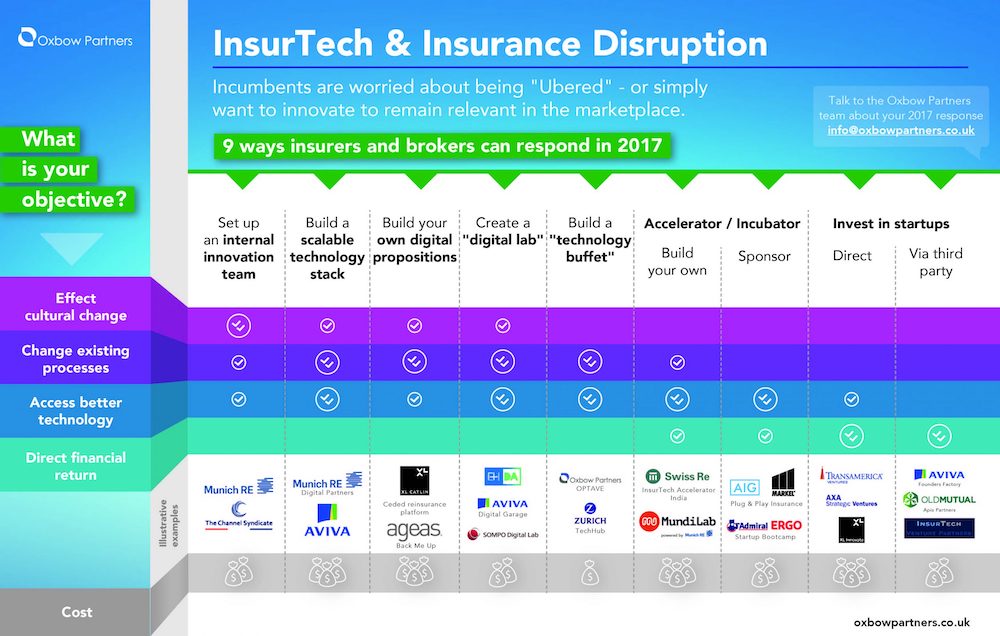 Set up an internal innovation team

Innovation teams are – and this is not to belittle them – an “entry level” management response.  They generally have broad remits, and their first objective is often to figure out the specific innovation actions management should take.

Innovation teams generally have a non-executive remit.  This means that they can only advise and cajole their internal clients.  This is no bad thing if a company is seeking cultural change – but clearly the path to change can be slow and frustrating.

It is important to be clear about what advising and cajoling is.  In a previous blog post, we noted that, depending on the company, the focus for an innovation team could be idea generation, development or implementation – because innovation isn’t just about having a good idea in a dark room.  A good innovation team thus plugs the gaps where companies have deficiencies in the core business.

We are hearing from an increasing number of insurers who have decided that they can no longer avoid tackling the big, hairy legacy problem.  For example, Allianz SE employed its first CDO in 2016 and has committed $100m p.a. for digitalisation of its German business.  Incumbents are realising that their systems are severely impairing the propositions they intend to offer in the market, and costing an arm and a leg.

Munich Re is in the fortunate position of not having a primary insurance legacy problem in its reinsurance business – obviously.  That has helped them set up Munich Re Digital Partners in 2016 – a business that uses an innovative technology stack to enable digital distributors deliver a beautiful, end-to-end customer journey.  (Oxbow Partners helped Munich Re build this technology stack.)

There’s no quick fix for building a scalable technology stack.  However, some of our thinking around policy admin systems might help.

Build your own digital propositions

If you’ve got ideas, why not put them into action?  The premise of our Agile Strategy™ methodology is that companies should spend less time thinking about what to do, and more time doing it.  As such, we like companies who have identified an opportunity to build a digital proposition and have pushed this forward.  Good examples include Ageas’s proposition for millennials, Back Me Up, and XL Catlin’s commitment to digitalising ceded reinsurance.

Even if the ideas don’t fly, they don’t have to cost too much to set up and generate a huge amount of organisational learning.

Some insurers have gone a step further and built “labs” with a brief to both defeat the legacy and build digital propositions.  These labs are staffed with technologists and digital product managers who are shielded from the core business’s processes, structures and culture.

These labs require a relatively significant investment.  However, we are seeing a number of insurers doing genuinely exciting work in their lab.  A good example is Euler Hermes Digital Agency.

When we speak to clients, we often hear a similar story: we know we have lots of operational issues that can be fixed by technology but we don’t know where to find that technology.

When we speak to technology companies, we also hear a similar story: we have a great solution but we don’t know our way round the insurance industry to pitch.

We think the solution is for incumbents to find “technology buffets” (as we described in this OpEd in Insurance Day).  These buffets consist of technology companies with solutions relevant for (but not necessarily targeted to) insurers and brokers.  They might cover data and analytics, AI-powered accounting solutions, marketing and much more.

How to create the technology buffet depends on the size of company.  Major global players may decide that they have the scale to merit building the buffet themselves – for example Zurich’s Tech Hub – whilst all other players are surely best advised to tap into a third party platform, such as OPTAVE, the Oxbow Partners Technology And Vendor Ecosystem.

Organise your own accelerator / incubator

Accelerators and incubators are much “on trend” at the moment – and some incumbents have started to build their own.  The effort to build such a proposition is, however, such that this option is only really available to the largest players.

The greatest challenge for any incumbent choosing this option is how to attract the best startups to their programme.  What do you offer startups, and how does this measure up against what established digitally-led accelerators and incubators can offer?

The “lighter” option for accelerators and incubators is to sponsor one, as companies such as Ergo and Admiral have chosen to do with Startup Bootcamp in London and AIG and Markel have done with Plug & Play.

Sponsoring an accelerator is not cheap and the question for incumbents is what they want to achieve.  We observe that the amount of knowledge transfer from startups to the incumbents’ core business is limited.

Corporate Venture Funds (CVFs) are all the rage at the moment – insurers of all shapes and sizes are running them from Munich Re to AXA to Aegon and beyond.

The CVF model is challenging.  CVFs don’t have the spread / diversification of a VC fund and they are generally fishing in a more limited pond (in this case InsurTech, broadly defined).  Second, it is not always clear what their “right to win” is compared to VCs.  Third, the level of knowledge transfer from portfolio companies to the core business is often a lot lower than expected.

Indirect investment in startups (via a fund)

A better investment solution might be to invest in startups via a third party fund.  This option clearly avoids some (but not all) of the challenges of the direct investment model.  However, it resembles an investment class more than a strategic response and so users need to evaluate InsurTech investment against other asset classes.

Oxbow Partners has deep expertise advising incumbent insurers and brokers about their InsurTech response.  We would be delighted to discuss your strategy with your management team.