With Brexit underway and Trump in the White House, 2016 was not a good year for forecasters.  We will try to buck the trend by predicting which areas of InsurTech will have an impact in 2017. 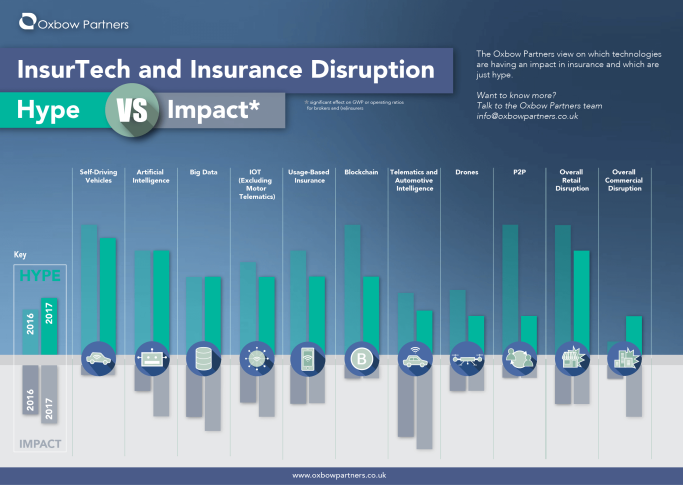 Futurologists have predicted mass adoption of self-driving, or autonomous, vehicles since cars were first invented. We are finally a lot closer to this vision; for example Google and Uber are running trials on public roads. The consensus view is that consumer-ready autonomous vehicles are 3 years away and ubiquity is another 10-15 years down the road (pun intended). But this does not mean that self-driving cars are about to arrive – there are complex regulatory and ethical issues that need to be solved first, notably the behaviour of cars when they can choose between multiple crash scenarios, but cannot avoid a crash altogether.

In 2017 we expect to see a lot more trials, and hence hype, but we won’t see any major rollouts for several years.  The hype will drop slightly as we start to tire of the undelivered promise of mass adoption, and the impact on insurance will be minimal.

Our recommendation: In the short term, focus on the challenges and opportunities arising from real and current advances in the connected car.  In the medium term, recognise that the ubiquity of autonomous vehicles will lead to fundamental, structural changes in vehicle ownership.  To some extent these changes are emerging from independent trends such as the sharing economy.  Test your strategy against some of these “transition states”.

Artificial intelligence has been much hyped in 2016 – but unlike several other InsurTech trends it is already having an impact on insurance. For example, Shift Technologies (Bitesize profile) have processed over 70m motor claims using AI to identify fraud.

We are confident that AI will continue to gain traction in 2017. It has such a breadth of insurance use cases (see our recent AI primer) and potential value to insurers (e.g. marketing optimisation, fraud reduction, process efficiency) that we predict a lot of activity in 2017. It will, however, take until 2018 before the full potential of AI is realised.

Our recommendation: Get familiar with AI use cases and build a process for surfacing opportunities to adopt it in your business.

Big Data has been exciting insurers for more than five years – although many are arguably still struggling to use Small Data effectively. We are seeing an increased focus on fixing the legacy at many insurers and brokers at the moment – ripping out old systems to build single customer views, for example.  We think this trend will continue in 2017 and we see two areas of particular focus: fraud management (because this is central to delivering a great customer proposition in a digital world) and improving underwriting results.

Our recommendation: Ask yourself whether you are a data-driven business.  If not, work out what you can do to move the business in that direction – it is a lengthy cultural as well as technical process.

The ‘internet of things’ is the connected network of devices and sensors that talk to each other, and us, over the internet. This allows us to control devices remotely – and they also gather a huge amount of information.  Examples include smart meters and mobile app controlled lighting.

There is no denying that this trend is real: there are now estimated to be 22 billion internet connected devices in the world. However, insurance propositions have yet to get to any scale. The most advanced IOT insurance proposition we have seen in the UK is Neos (Bitesize profile). We predict that insurers will work out how to make better use of IOT in 2017, but there will be no significant impact until at least 2018.

Our recommendation: Think about how to use IOT in your customer proposition.  Don’t think about adding IOT into an insurance proposition, but re-think the domestic risk management proposition.  Sales channels and services might be very different to today.

In 2017 we expect existing insurers to launch UBI products across travel, gadget and motor. We don’t expect UBI to become a mainstream product any time soon, mainly because it requires customer to think about insurance for more than 30 minutes every year.

Our recommendation: In the short term consider the impact of the sharing economy on your existing home and motor portfolio.  How can UBI help you move these traditional products into the new economy?

Blockchain was one of the most hyped technologies in 2016 (‘Blockchain is the new google’). We are sceptical about its potential to disrupt insurance any time soon and 2016 did nothing to change our views. We saw only small proofs of concept (TOM ran a pilot throughout 2016) and nothing that looks like it’s gaining scale.

We recently covered one Blockchain startup (ChainThat, Bitesize profile).  The company is doing interesting things in the London market but are still early stage.

Our recommendation: Prioritise other opportunities and wait for a “consensus” insurance use case to emerge.

Telematics, or black-box car insurance, was the first InsurTech innovation to achieve any significant adoption. Currently there are approximately 750k black box policies in force in the UK as of January 2017. Most of these policies are for young drivers as larger premiums are required to absorb the cost of installing the box (typically £50-100).

In the long term we expect automotive manufacturers to use automotive data (to which they already have access) to enable propositions that go beyond the driving experience.  It is not yet clear whether they will give third parties, such as insurers, access to this data or keep it solely for use by their captive insurer. The good news is that insurance is not a major revenue stream for manufacturers so they might be more inclined to sell the data; the bad news is that manufacturers sell insurance to a) help to keep residual values high as repairs and servicing is done with branded parts and b) increase propensity to repurchase from the same brand.

Our recommendation: In the short term, continue to develop your telematics capabilities.  In the medium term consider how a new automotive data environment could impact your business in a broader range of segments than today and how you can partner with the new owners of telematics data to get access to insurance customers.

2016 saw the rise and fall of P2P. This is best exemplified by the story of Lemonade (Bitesize profile, update). Lemonade made marketing waves in early 2016 about being the “world’s first P2P insurer”, and put a “giveback” mechanism at the centre of its proposition. The P2P angle was quietly dropped in early 2017.

We believe that P2P propositions will pivot away from that model like Lemonade, and focus more on delivering great customer propositions.  P2P is just too complicated in insurance (and it doesn’t really work anyway)

Our recommendation: Move along, nothing to see here.

There’s not much to say on drones. Commercial insurers are using them where valuable, and will increasingly so. Drones are less relevant for retail insurance, except in extreme cases e.g. major road traffic accident or severe flooding. There may be an opportunity to broaden their use in retail when regulation by the CAA is clarified. In 2017, however, we predict nothing will change except for a slight decline in the hype.

Our recommendation: Carry on as you were.

Retail disruption hype has been at the heart of InsurTech in the last 12 months. InsurTech commentators have been at pains to prophesy the ‘Uber’ moment for insurance. In our opinion this moment will never come. We do see a lot of change afoot, but it is likely to be at the pace that insurers can (just about) handle. In 2017 we expect the InsurTech ‘prophets’ to continue scare mongering but we believe insurers will increasingly shift from fear to practical responses (see our recent infographic on how insurers can respond).

Our recommendation: Don’t panic, work out your response

In 2016 InsurTech ‘prophets’ said very little about commercial disruption. From the conversations we’ve had with our commercial insurer clients they acknowledge they are less advanced in their efforts than their retail colleagues. They are now starting to respond, and from what we’ve seen, in concrete and practical ways. For example, XL Catlin have recently set up their Accelerate business unit to identify ways to improve parts of the existing business using new technology and business models. In 2017 we expect to see more commercial insurers follow suit and start ramping up their InsurTech responses.

Our recommendation: Work out your practical response to InsurTech and get into action.

In 2017 we set out to sort the substance from the sensation. InsurTech is no stranger to hype but with 2020 and 2021 bringing far more change than anyone bargained for, the industry has seen a fresh round of speculation. We revisited our predictions in 2022 to outline 8 trends shaping the industry.

Welcome to our first InsurTech Impact 25 member update of 2022, focusing