Q1 2017 InsurTech volumes were muted at just $283m leading some to question whether InsurTech had run out of steam. New data from CB Insights published in Willis Towers Watson’s second Quarterly InsurTech briefing shows that investment volumes were close to $1bn in Q2. 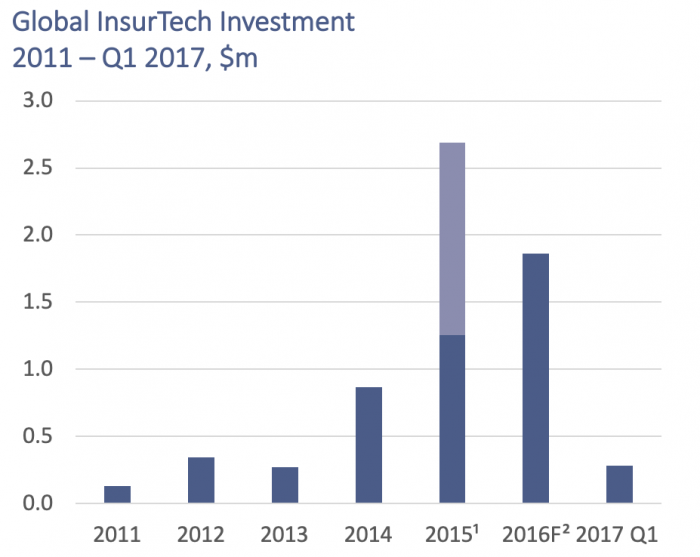 Q2 was driven by some big deals

Although Q2 saw a high number of deals compared to the trend, it was in fact some large deals that drove investment volumes. Q2 saw 8 separate firms raise more than $30m each, with the top 3 each raising over $100m. Indeed, more than 90% of the overall funding for the quarter came from 10 investments.

Interestingly, 6 of the 10 biggest deals were for health or life based start-ups – not necessarily where InsurTech action is perceived to be focused at the moment. The three biggest were:

Q2 investment levels stood out, but generally does

But it remains to be seen if FY2017 outperforms. Our analysis suggests that Q2 has historically accounted for 50% of InsurTech funding so, on past trends, 70% of 2017 investment volume should already have been completed by 30 June.

And as Sam Evans, General Partner of Eos Venture Partners, an InsurTech fund, says: “It’s hard to be confident about trends in historic InsurTech investment levels because the sector is still maturing and therefore a small number of large deals can create volatility in quarter to quarter results. Overall the direction of travel is very positive and importantly InsurTech companies are starting to deliver tangible results to back up their investment.” We agree.

Europe is in the ascendancy

If the geographical pattern of funding continues through H2, then 2017 will be the first year in which European firms receive a third of global InsurTech investment. Of the money that went to Europe, 27% went to the United Kingdom (9% of total), though this was partly driven by Gryphon’s outsized round.

The InsurTech investment environment remains buoyant and any suggestion that Q1 volumes were a signal that InsurTech was losing its fizz seems misplaced.

We expect increased lumpiness over the next 12 months as a number of companies move from seed stages to Series A and beyond, for example claims companies RightIndem (Bitesize) and Tractable (Bitesize). But that’s healthy lumpiness – a symptom of companies being successful and raising growth capital.