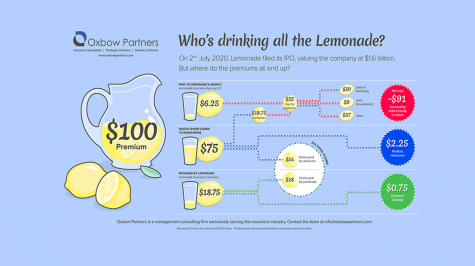 Having launched in 2016, Lemonade completed its IPO on 2 July 2020, which valued the business at $1.6 billion. On 6 July, just 4 days after their IPO, the company’s shares had almost tripled in price from $29 to $81. Despite a subsequent drop in price, the $70 per share price now values the business at just under $4bn. No-one can deny the founders of Lemonade have been hugely successful – but are they as revolutionary as people think?

We published an article on 2 July entitled ‘An unfashionable, and maybe unpopular, view on the Lemonade IPO’ – so we’ll refer you to that for a more detailed opinion. For the purpose of this article, we’ll be zooming in on the company’s finances. The company uses a flat fee system, and various reinsurance arrangements, to minimise volatility – aiming to provide consistent and reliable returns for its shareholders once it starts making a profit. So where does all the money go? 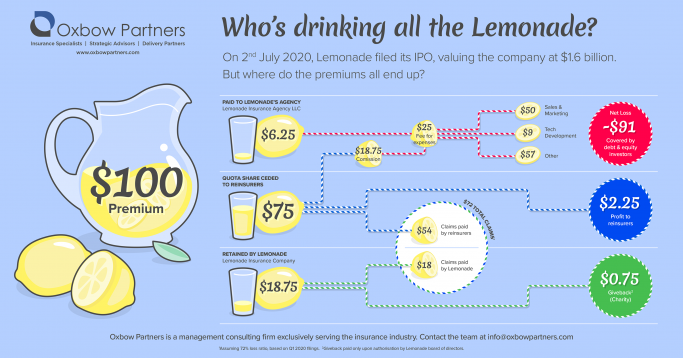 The first unique element of Lemonade’s business model is its 25% flat fee. The company will only take a maximum of 25% of the GWP to cover expenses and profit even if the loss ratio is lower than 75%. If expenses can be reduced to below $25 per $100 of premium, and the loss ratio kept at less than 75%, then Lemonade will begin to make a profit.

Claims are then paid out of the remaining 75%, and anything left over is donated to charity in the annual ‘giveback’. This giveback has been a major emphasis in the company’s marketing, but in reality, it’s a very small proportion of actual spending. Giveback for the 12-month period ended 30 June 2019 amounted to about 1.5% of earned premiums.

From the start of July the company has begun ceding 75% of premiums to quota share reinsurers, meaning Lemonade only underwrites 25% of the risk. This also means that Lemonade’s giveback now only relates to 25% of premiums.

This all sounds good in principle – but will it work in practice? As you can see from the graphic above, Lemonade is currently losing around $91 for every $100 of GWP. Provided their loss ratio remains below 75%, the key to profitability will be a drastic reduction in expense ratio. In 1Q20 the main expenses were sales & marketing, and general & administrative costs.

With GEICO spending almost $2 billion on advertising in 2019, it’s remarkable how well Lemonade has done with a sales & marketing spend of $90 million. But the conversion of marketing spend into GWP will have to increase significantly for Lemonade to reach profitability. Lemonade’s premiums would need to at least double for the 25% flat fee just to cover the current level of marketing spend. As for general & administrative costs, we suspect these are unlikely to decrease drastically in absolute terms. Lemonade is growing quickly but there is still some way to go to increase its GWP sufficiently to outweigh these fixed costs and start making a profit. 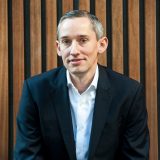 An unfashionable, and maybe unpopular, view on the Lemonade IPO

Impact 25 2020: Barbarians, Samaritans or Trojans at the gate?