On 28 January 2022 Lloyd’s released the second edition of their Blueprint Two Interactive Guide. The release of the second interactive guide is the fifth major publication related to the marketplace’s Future at Lloyd’s transformation programme initiated by CEO John Neal. It follows the original Prospectus, Blueprint One, Blueprint Two and the first edition of the Interactive Guide. It is the first release following the JV between Lloyd’s, the International Underwriting Association (IUA), DXC and is supported by the LMA. The Oxbow Partners team has gone through the 175-slide guide and summarised it for those short of time.

How did we get here?

The second Interactive Guide comes seven months after the first Interactive Guide was published and fourteen months after the release of Blueprint Two. When Blueprint Two was released it narrowed the scope of the initial transformation programme announced in Blueprint One. The focus concentrated on modernising open market risk placement, DA facility and risk placement and claims processing journeys.

To refresh your memory of Blueprint Two, read our synopsis and the Oxbow Partners View.

The first Interactive Guide released in May 2021 was Lloyd’s first attempt to advise managing agents and other market participants on what they should do to prepare their organisations for the solutions being delivered by Future at Lloyd’s. This second guide focuses on what Blueprint Two will be doing over the coming two years of delivery.

Summary of Blueprint Two: From Lloyd’s to London Market

Whilst there are no great surprises, this is the first major update to not mention the ‘Future at Lloyd’s’ in any of its 175 pages. We take this as a sign that the transformation programme is repositioning as a London Market (rather than Lloyd’s) initiative. This is supported by the wide range of participants in the ‘voice of the market’ section.

This update tries to simplify how the solutions are presented by moving presentation from process flows to capability building blocks. Simplistically there are four main building blocks:

A major contribution of the latest update is an explicit delivery roadmap spanning from Q2 2022 to Q2 2024 and laying out key market milestones and the programmes of work leading up to them. These cover the three areas of focus: open market, delegated authority and claims. The intention is to move to fully digital services in Q2 2024.

This 2024 milestone implies that all market participants need to be migrated by this date. However, there is reference to ‘transition services’ for laggards, which include updates to Lloyd’s messaging, replacement of user interfaces or portals (e.g. LIDS, POSH etc) and some changes to reporting content and user credentials.

The roadmap also sets out interim milestones which include: 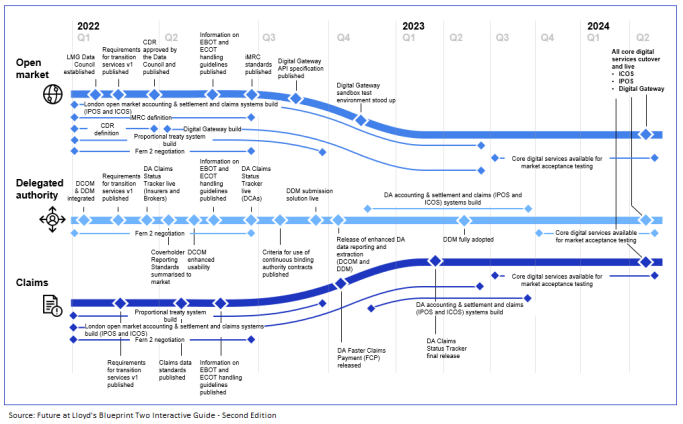 The Oxbow Partners team will be considering this document in further detail over the next few days and will publish an analysis piece. Subscribe using the button below to receive it straight to your inbox.

In January 2022, Lloyd’s released the second edition of their Blueprint Two

Hard or Soft: The end of market cycles?