The future of InsurTech: Some thoughts

A few months ago I was asked to present at a client’s team Zoom coffee break. The subject was the future of InsurTech.

I presented the following slide. 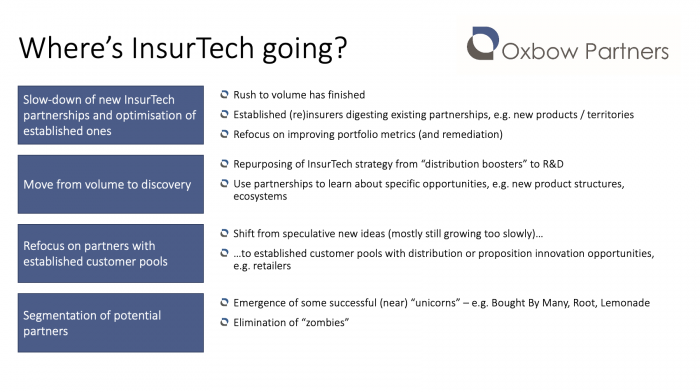 In this blog post, I summarise some of the key points.

1. Slow-down of new InsurTech partnerships and optimisation of established ones

We are seeing far fewer press releases about InsurTech partnerships now than back in 2015-2017. One of the big learnings since 2015 is that partnerships need investment – money and effort – to flourish. Insurers and reinsurers are now digesting existing partnerships, for example helping their partners develop new products or move into new territories. In some cases, they are remediating their portfolios. For example, we have helped an insurer review their InsurTech portfolio, understand the risks that were accruing from a number of poorly performing investments, and develop an exit / remediation strategy.

2. Move from volume to discovery

The mandate of many of the early InsurTech units was to find Distribution InsurTechs and grow volume. This turned out to be harder than expected and many InsurTechs have grown much more slowly than expected. We expect many teams to refocus on R&D – using partnerships to understand segments of the market and inform strategic decisions. A good example is Munich Re, which has clustered its InsurTech partnerships around SME and mobility. Its $250m investment in Next Insurance’s $250m Series C in late 2019 after participating in some of the early rounds is a good example of moving from structured discovery to executing big, but calculated, bets. 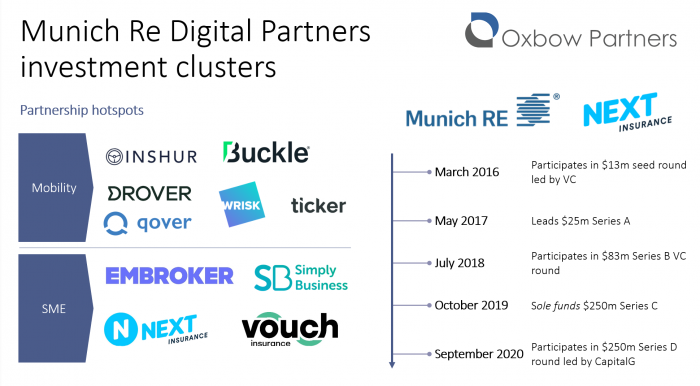 Despite the hype, most Distribution InsurTechs are still growing slowly. Bought By Many and Inshur are notable exceptions in the UK and perhaps Root or Metromile in the US. For all the hype, Lemonade has only reached $116m of GWP in 2019 – at considerable marketing expense. We therefore foresee a refocus on established customer pools, where learnings about distribution and product can be deployed at scale quicker. We are not surprised to read that John Lewis, the leading UK retailer, announced a partnership with Munich Re’s Digital Partners team in October 2020 to deliver a ‘modernised’ home insurance product.

Finally, we expect the InsurTech landscape to be rationalised over the next year. Successful companies will draw in ever bigger rounds and expand their business models, whilst those who have struggled to find product-market fit will be eliminated.

HealthTech, ones to watch this year at ITC

As the content platform for ITC, Magellan™ is here to help you

8 ITC attendees you should talk to about cyber security

Explore AI and automation at ITC with Magellan™