Eight things you need to know about Zhong An

Zhong An is variously a Chinese insurance company, a tech startup, and the first “new generation” InsurTech to have IPO’ed.  It floated on the Hong Kong Stock Exchange in September 2017 and raised $1.5bn at a valuation of $11bn.  This made it the sixth most valuable e-Finance company in the world (after the likes of PayPal, Square, and Stripe).  It’s quite a remarkable achievement for a company that was founded only in October 2013.

Here are eight things you should know about it:

1. Zhong An’s growth has been unprecedented

In its first three-and-a-half years of operation (October 2013 to March 2017), the business sold 8.2 billion policies to over half a billion policyholders.

2. Zhong An has generated this growth through a network of distribution partners

Zhong An is not primarily a consumer facing brand.  Instead, its sales have been generated through a network of around 200 “ecosystem partners”, who delivered 87% of total 2016 GWP. They also sell through brokers and direct through their own platforms, which is a growing part of their business.

But a small number of partners drive the lion’s share of premium.  For example, Alibaba (the Chinese e-commerce platform) delivered 53% of 2016 GWP, whilst Ctrip (China’s most popular online travel agent) delivered a further 21%.  Several distribution partners – including Alibaba and Tencent – are shareholders and founders of Zhong An.

3. Zhong An has re-thought the insurance product

Zhong An is catering to an “asset light” demographic – more on that shortly.  One consequence of this is that its property covers are weighted towards “modern” risks such as mobile phone screen cover.

More uniquely, the company talks about a focus on “consumption risk” rather than more traditional property risk.  For example, the main product line is a shipping return policy for e-commerce customers (35% of 2016 GWP).  Typical cost for this product is between $0.02 and $0.50 per policy (for merchants).

4. Zhong An has built a portfolio of over 200 products

Zhong An are arguably masters of the niche product.  Some of these carve out specific risks from standard policies, for example insurance against specific illnesses like cancer or diabetes.  They also differentiate between shipping return cover (for those that order multiple sizes of shoes online to find the right fit) and shipping damage cover.

Others products are zany, and bordering on fun.  For example, during the 2014 World Cup, they offered “hooligan insurance” to fans for $0.45 to cover them for medical costs from skirmishes with fans of opposing teams.

Finally, the company has a number of products which appear to go even further beyond the boundaries of insurance, for example a policy that pays out when the temperature goes above 37C to compensate for extra living costs.

The Chinese regulator banned a number of Zhong An’s products for being just a little too zany, but tends to ban products after they have been launched.

5. Zhong An knows a lot about its customers

The company receives vast amounts of customer data from its ecosystem partners, such as customer behaviours (e.g., search and browsing history, consumption patterns), personal and transactional data from credit reports, and third party data.  Together these sources allow them to better target and price products for micro-segments, and design new products for them.  Customers are sticky as well—on average they bought 10.3 policies each in 2016.

According to its IPO filing, 2016FY GWP was $490m.  It has grown tremendously with a three-year GWP CAGR of 107%, excluding the foreign exchange effect.  Zhong An is barely profitable (flat in 2016 and slightly positive before that) and has a high combined ratio of 105% in 2016.  Its loss ratio was 42% and expense ratio was 63%.

Because it distributes almost exclusively through partners, the cost of commissions and “handling charges” are high, ranging from 17% of premiums in the lifestyle ecosystem (its largest product set) to 81% in travel (its second largest product set).  The average in 2016 was 39% (click to enlarge infographic) 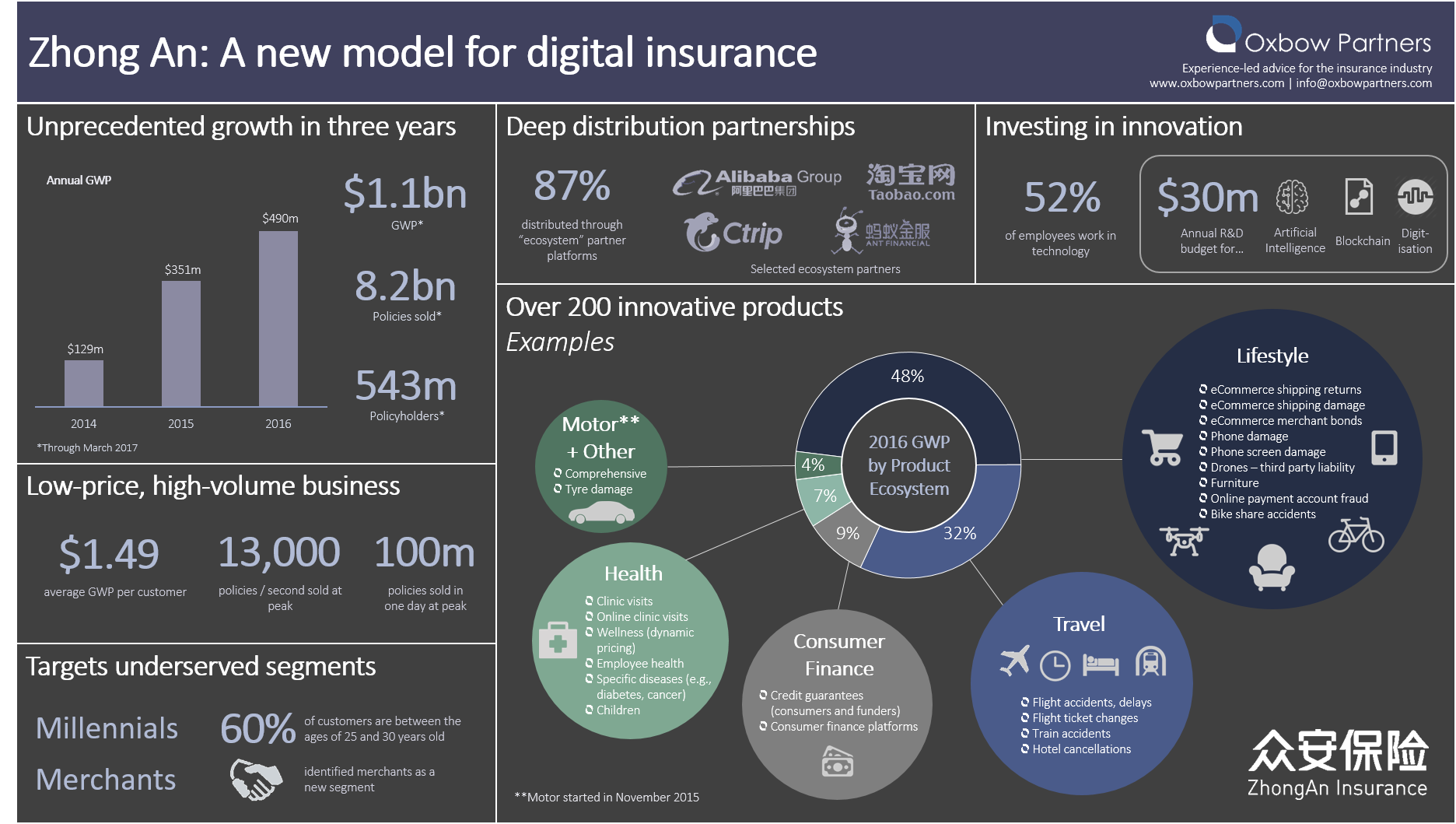 7. The company has found new segments, like young adults and merchants

In addition to targeting consumers, Zhong An also targets independent online merchants.  Much of China’s eCommerce market is supplied by small merchants that are forced put down bonds in the case of customer disputes / liability as part of being on a platform.  Zhong An provides a product to cover these costs meaning the bond is not required.

8. The company is more technology than insurance

The company has hived off R&D into a subsidiary designing internal solutions and solutions for ecosystem partners.  This tracks some of the Oxbow Partners thinking about the structure of innovation teams – see our infographic.  The hypothesis, according to the IPO prospectus is that the company can monetise many of its assets in “non-traditional” ways, for example a white label eCommerce platform, its policy administration system, facial recognition software, and smart contracts IP that it has developed.

China is China; any “read-across” from Chinese experience and trends needs to be treated with the utmost scepticism and caution.  Nonetheless, we think there are a few interesting thoughts for international insurers:

First, Zhong An has created the concept of the “customer-centric micro-affinity”.  “Micro-affinity” has existed for some time – for example Columbus offering travel insurance for £1 per journey on UK train booking websites.  However, these add-on products are clunky – standard products with compressed coverage and the normal claims process (“can I be bothered to write in and claim for my £20 compensation for a delayed train?”).  We think there is scope in international markets for designing more bespoke add-ons to enhance e-commerce propositions.

More broadly, however, we think that micro-products should be more in focus by insurers.  We were recently talking to a client about opportunities in insurance for startups.  Traditional insurance thinking immediately steers towards professional indemnity insurance and other established product lines.  However, in reality, the biggest fear of a startup founder is likely to be something like a coffee spillage on a laptop.  Insurers should move away from existing product definitions and – like Zhong An – think about the specific risks that worry people.

Third, the indemnity of Zhong An’s products is interesting.  Many of them have an automatic trigger (e.g., flight delays, photo of a broken screen), meaning that claims resolution is easy for the customer and carries no operational expense on a case-by-case basis.  We recently published a blog post about opportunities with parametric triggers in personal lines insurance, and Zhong An is a good illustration of their application.